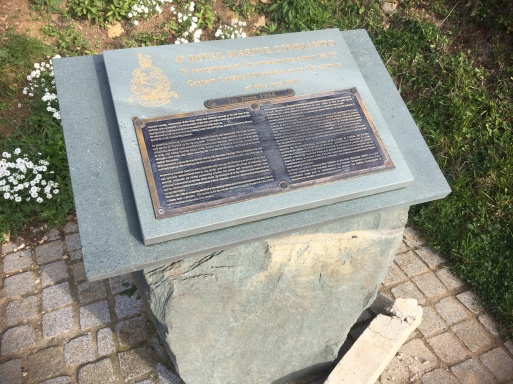 Escaping the heat of a 24 degree October day in a small ferry terminus near Fouras in Southern France with a still sea view and an hour or so to kill before a boat can take me to the home Napoleon lived in before he was exiled to Saint Helena I find myself with time to continue the story of my first full day in France as I left off.

With the mind print of the doctors many faces slowly fading away, and with the thought that there was no obvious way of getting back to the campsite, I decided to explore where fate and Yannick had left me. A plan of what to do next must surely emerge.

Soon after procuring my first baguette, and not really knowing what path to take, I found myself following two photographers I had noticed out on a derive. They took me to what turned out to be a beach of shells by a busy harbour. I discovered later that the beach was created by fishermen dumping the ‘empties’ off the harbour wall, but at that point I marvelled at the natural phenomenon that could have created such a coincidence of calcium.

Next to the beach a plain stone memorial with no words stood flat against a harbour wall. Shells covered the base of the memorial and two wind battered poppy reefs lay on top of the shells, the colours of the plastic a deep red incongruous laying on the pastel creams of the shells. To the right, up an embankment, I found a larger memorial plaque and map telling the story of the liberation of the town. As I read the detail I stopped worrying about the day that would have been and settled into the day that was. It seems losing an ear plug up ones own canal without a paddle forces one into the moment, sans grace and panache true but what does this matter.

In Port-en-Bassin they still remember the names of the soldiers whom liberated the town, the men of 47 commando, who lost 29 of their number just fighting their way off Gold Beach, before battling through 12 miles of enemy territory to take up positions surrounding the town. Here they encountered fierce fighting. Their mission was to liberate the town quickly. The allies planned to use it as the landing point of Pluto, a giant underwater pipeline delivering fuel to keep the advancing army moving forward away from the beaches.

I don’t know whether soldiers knew the strategic importance of what they were doing but they knew their mission was to take back the town. Their main obstacle was a heavily armed bunker, fortified with barbed wire, mine fields, flame throwers and machine guns.

Walk up a few boarded muddy steps and a long a hilltop path and you can easily find the bunker. It’s entrance now filled with concrete, it’s impregnability is not hard to imagine. I was moved to find beside it a second memorial to the men who took this bunker, notably a Captain Cousins, who lost his life leading a last desperate but ultimately successful attempt to capture it.

Reading the exact detail of the fighting that took place that day and the manner in which Captain Cousins died made me realise that the people of Normandie see D day in an entirely different way to most British people. For them it is still a lived experience, remembered personally. The grand children of Henri Gouget, the Gendarme who helped the commandos, probably still live in the village. To them it is all very real and marks the difference between a life lived with free will and one lived in bondage to another persons idea.

To British people D Day is a different thing. I don’t suppose most of us know the detail – of who fought in which village to capture which bunker or artillery position. We only know D day as a mythic national experience. A good thing Britain did, along with resisting invasion since 1066 and beating Napoleon at the Battle of Waterloo. Although most of us probably only know this because of a Swedish pop group.

But in Port en Bessin they do know the detail. The knowledge is all there on storyboards. And it is not as some may suppose glorifying or memorialising war. It is remembering those who brought with them the dignity of freedom.

More Photos
My friend Andy and I marching with 700,000 others at the #peoplesvotemarch in London yesterday. Such an incredible experience. Really peaceful happy atmosphere with samba and brass bands, old and young, a kid on the side of the road getting the entire march to say Bollocks to Brexit as we marched past. Let’s keep the pressure up! Time to write to your MPs, donate to The People’s Vote, get ready for the next march, be alive to the possibility that things can change. Love your #freedom
I cycled 1000km without conversation. Ten days where my verbal exchanges consisted of the perfunctory and polite. Hello and one loaf of bread please. Thank you and goodbye. I do not so much mind this as cycling allows unparalleled space for contemplation and in opposition to the movement a curious stillness of mind. I have little anxiety on a bicycle. Perhaps it is because I am finally breathing. Not just the survival breath but the living breath. To feel every gob of air. After ten days like this it could be that one forgets how to converse, or whether indeed it is actually what wants. Slowly through Austria conversation arrived. A joyous wind of words. The breath of others. At first it was French Jaque, cycling to the Black Sea on a recumbent bicycle, then a French family who had heard word of me from Jaques. All of a sudden, as we each converged in motion on the same campsite, Dagfinn, cycling from Norway to Africa and Michal and his girlfriend, to their home in Bratislava (none pictured unfortunately). We shared one cold evening in a warm campsite lounge talking about Europe. Two days later I met Matt and Steph, two Australians making the most of their 90 day Schengen area visas. A day over 90 and they face a five year ban. I wondered if that was our fate post Brexit. Incredibly their trip included a stop in my home town of Machynlleth, a small town in Wales. We cycled to Vienna together, and although talking all the way, I notched up my fastest ride of the trip. The next day I met Niki, on the way home to Budapest after cycling around Spain, Portugal and France. We rode into Bratislava together and straight into a Critical Mass cycle ride, taking back the busy streets to celebrate the bicycle. It was the perfect end to my 1500km cycle ride. Followed quickly by another perfect end-falling into the warm hugs of my friends Bec and Ralph, and celebrating the Bratislava festival of light together. The journey continues but for the time being not by bike! So I celebrate my beautiful Gazelle, who has given me freedom of movement before it is taken away again. We should never imagine that freedom is permanent but it is joyful! #cyclinglife #freedom #cycling
Some days even monkeys need a rest. 1250km cycling since Strasbourg. A little #donau time time appreciated. This has got to be one of the best campsite views ever. Very hard to leave! #cycling #lovecycling #cyclinglife #cycletouring
A beginners guide to how to get to Austria. Find the door. Go through it. Push bike and carry panniers up the stairs. Walk along the high wall. Breathe deeply. Good time to look at views after climbing stairs with bike and panniers. Push bike and carry bags along high walkway. Climb down stairs with bike and panniers. Go through a second door. Load up panniers and start cycling. Cross the line! Voila, you’re in Austria. Look back at how you crossed into your tenth country and feel that was the best most awesome way to get into a country yet. #cycling #donau #lovecycling #cycletouring #damborder #takingbikecontrol